The Reliability of the Bible, Part 3 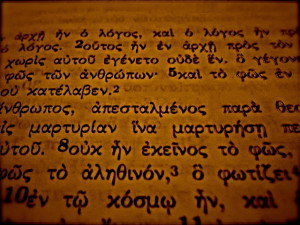 OK.  Let’s continue the discussion from the previous two articles of this title.  When it comes to the New Testament portion of the Bible, the evidence is even better.  The books of the New Testament were written in Koine Greek (first century “trade Greek”) between AD 45 and 100, with the very earliest still existing manuscript portions dating from just after AD 100.

For example, there is a fragment of chapter 18 of the Gospel of John, which dates from around AD 110.  Since the Gospel of John was likely written around AD 95, that puts the time from original to the earliest known copy at about 25 years. An even earlier manuscript portion, known as the Chester Beatty Papyrus, dates from the years just after AD 100.  Since Paul probably wrote this portion some time during the years 55-65, this puts the time lapse from original to copy at less than 50 years.  These examples illustrate the amazingly high quality of New Testament manuscript evidence compared with other examples of ancient literature. All told, there are something like 5,000 early Greek manuscript portions of the New Testament in existence today.  Add to this evidence the  many ancient Latin, Syriac, Coptic, Ethiopic and Armenian translations from the early centuries of the Christian Church.  Working with these manuscripts, scholars are able to do intensive comparisons of the available manuscripts in order to “weed out” any copying mistakes and synthesize the original text of the New Testament.

Beyond the manuscript evidence, there exist a very large library of writings leaders of the early Christian Church (before 500 AD) that quote so extensively from the New Testament that it can be virtually reconstructed from those writings alone.  One expert estimated that only one half of one percent (.05 %) of the New Testament is in any doubt as to the original wording, and most of the uncertainty has to do with word order, rather than content.  So, just as with the Hebrew Scriptures, the text of the New Testament is highly accurate.

All of this points to the conclusion that the Bible, in both Old and New Testaments, is extremely reliable.  It has lost very little, if anything, in its transmission from the original writings of its authors.  While none of this by itself proves the Bible’s inspiration, it does lend credence to Judeo-Christianity’s ancient conviction that the Scriptures are the word of God, fully inspired and authoritative for the ages.