The Bible: Which Books? 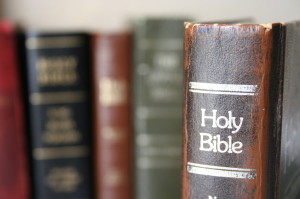 The Bible is a continuing source of conversation and debate among all sorts of folks, from ardent Christians to agnostics, and from academic biblical scholars to people with little formal training.  First, let’s acknowledge the major groups who look to the Bible as their holy scripture.  This will make a difference in understanding why different groups disagree over which books should be included in the biblical material.

Let’s begin with Judaism.  After all, the books of the Bible were produced from the heritage of Judaism and, with a few possible exceptions, the books were written by practicing Jews.  So, traditionally Jews accept 35 books as their scripture, from Genesis to Chronicles.  These books cover the creation of the world up until the years following the Jewish return from Exile, ending around 400 BCE.  They call this collection TaNak, a word made from its three divisions: Torah (or Instruction), Neviim (or Prophets) and Kethubim (Writings). TaaaNaaaK.

Though arranged and grouped differently, this material corresponds closely to the 39 books of the Protestant Old Testament.  The reason for the different number is that Christians divide Samuel, Kings and Chronicles into two books each as well as separating Ezra and Nehemiah.  But, apart from being arranged differently, the material is virtually identical.  Protestants accept a 39-book Old Testament because the earliest Christians began with this material as their scripture.

Roman Catholics use the same 39 books as Protestants do, but over time they have accepted seven other books into the Old Testament canon, as well as a few additions to the conventional books.  These additional books are usually grouped together as the Apocrypha (meaning hidden) and it includes books like the Maccabees, Tobit and Judith.  The Apocryphal material was officially canonized by the Roman Catholic Council of Trent in the mid-1500s, though it had been in common use for centuries before that.

Then there is Eastern Orthodoxy.  Orthodox Christians accept the 39 standard Old Testament books with some added material to books like Esther and Psalms.  They also have an expanded Apocrypha which adds three additional books to the seven books used by Roman Catholics.

I could also mention alternative Christianities, such as Mormonism and Christian Science, which accept the standard, Protestant Bible but which add unique books of their own.  In later vignettes I will spend time discussing the material that was not considered inspired scripture by the early Church, such as the non-canonical gospels of Thomas and Barnabas.  But this is enough to begin with.  See you next time and stay curious!