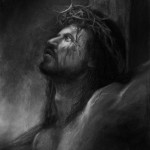 It is  Friday of Passion Week.  Jesus had been awake for more than twenty-four hours.  At this point in what we now call Passion Week, Jesus had endured the difficult interrogation by the Sanhedrin (the Jewish religious council) all alone.  Both during and afterward, Jesus was beaten and humiliated.  His friend Peter had managed to enter the courtyard of the High Priest where Jesus was being held, but when Peter was asked if he was one of Jesus’ followers, he strongly denied it in Jesus’ very presence.

Then Jesus was shuffled off to Pilate, who quickly passed him off to Herod Antipas.  Herod humiliated Jesus and then returned him to Pilate for final judgment. We should remember that Pilate was in a difficult spot.  As Roman governor felt blackmailed by the Sanhedrin into sentencing Jesus to death.  Seeing no way out of the predicament, Pilate made it clear Jesus had violated no Roman law.  Even so, after a whipping that left little skin on Jesus’ back and resulting in a catastrophic loss of blood, the Romans forced Jesus to carry a heavy wooden beam through the streets.  Before he reached the place of execution, Jesus stumbled and fell.  A bystander named Simon was then forced to carry the cross on the final leg of the journey.

At the place the Romans called Calvary (Skull Hill), Jesus was nailed to the crossbeam and the crossbeam was attached to post to which Jesus’ feet were spiked.  There Jesus hung from 9:00 in the morning until 3:00 in the afternoon.  At noon a darkness came over the sky as Jesus increasingly lost strength.  With a final cry of agony, he gave up his spirit, causing the veil in the Temple to split from top to bottom.

Joseph of Arimathea and Nicodemus, two members of the Sanhedrin who refused to condemn Jesus, asked for and received permission from Pilate to remove Jesus’  body for burial.  Joseph kindly offered his own unused family tomb for the purpose.  The burial party was under the pressure of time due to the commandment not to work on the Sabbath, which would begin at sundown–only a few hours away.  Because of this pressure the burial preparations were only partially completed.  One last caress by Mary, his mother and a mental note of the preparations still to be made, and they sealed the tomb.

But isn’t Jesus the miracle worker?  Isn’t he the Messiah, the Son of God?  How could God let him be treated like this?  Is God just a myth, or is he like the disciples who abandoned Jesus in his hour of need?  Maybe the skeptics are right when they sneer that nice guys always finish last.  Maybe the cynics are proven correct that evil ultimately crushes good and might trumps right.  The followers of Jesus were in deep shock.  For them, the crucifixion was more than a major disappointment: it was the crushing of all hopes and dreams. They were facing the real possibility that life ultimately favors whoever has the power to force their will on others. These are hardly the thoughts that faithful Jews should have had on the sabbath following Passover.

Have you ever felt abandoned and punished unjustly?  Have you wondered why evil sometimes seems to triumph?  Why is it that selfish and self-righteous people appear to prevail?  Those are truly desolate and terrifying thoughts, and many people have them.  Jesus’ friends and followers certainly felt that way at the foot of the cross and at the sealing of Jesus’ tomb.  But hold on: God isn’t finished. Hope is just around the corner!

Lifting Your Church from Decline to Breakthrough