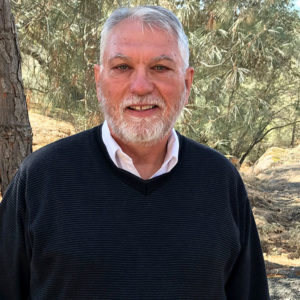 Dr. Michael Bogart is President and founder of Aspect Ministries. His work focuses on training Christians in three key areas:

Mike and and his wife, Melinda, are available to speak to a variety of groups and venues.

Besides nearly 40 years of various types of ministry experience, among college students, the pastorate and missions, Mike has been an instructor for several colleges and universities on a part-time basis in the areas of Western Civilization, Comparative Religion and Philosophy, including West Hills Community College in Lemoore, California; Excelsior College; Fresno Pacific University; Chapman University; and Brandman University.  In 2006, he was honored as the Navy College Instructor of the Year Award for Naval Air Station, Lemoore.

The Bogarts have had the privilege of training many dozens of leaders cross-culturally in countries like Haiti, Democratic Republic of Congo, Mexico and South Africa, as well as speaking and teaching in many venues within the United States.

Mike earned his Bachelor of Science degree from Northern Arizona University in 1974 and a Masters of Arts from Denver Seminary in 1979.  Mike earned his doctorate in Education in 2017 from Liberty University.  He has authored books and hosted a video series in which he explains the basic teachings and practices of a number of world religions, including Islam, the Jehovah’s Witnesses, Mormonism, and the New Age.