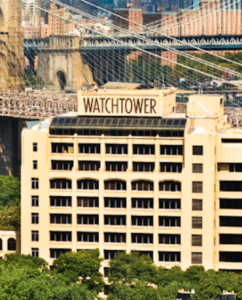 The Jehovah’s Witnesses: A Quick Summary

Jehovah’s Witnesses teach that Jesus died to restore the perfection of Creation and the human race. Personal immortality is the reward of true repentance, faithfulness to the gospel and service to Jehovah’s Kingdom as taught by the Watch Tower Society.

Colonial America was a religious patchwork. The Second Great Awakening (1800-1845) was a time of intense spiritual interest with free competition as the accepted arrangement. However, many felt that the doctrinal conflicts between groups pointed to the loss of true, original Christianity sometime in early Christian history. Restorationists believed they were called to restore original Christianity, either through a fresh revelation through serious, sincere Bible study. The Churches of Christ, Mormonism, and Seventh-day Adventists are three of the groups that began in this movement. Jehovah’s Witnesses had origins in this movement via Adventism.

In 1822, after study of Bible prophecy, wealthy landowner William Miller, concluded that Jesus would physically return to earth sometime in 1843 or 1844. The movement arising from Miller’s teaching is known as Adventism. After a series of specific dates passed in 1843-44 with no sign of Jesus, Miller claimed that a key cosmic event had occurred in heaven which would pave the way for Jesus’ return in the future.

Charles Taze Russell was born in 1852 in Allegheny, Pennsylvania. In his childhood, the Russell family settled in Pittsburg, Pennsylvania where his father, Joseph, owned a men’s clothing and accessories store. Though Charles’ total schooling amounted to only 7 years, he was considered extremely bright by his parents. The Russell family became avid converts to Adventism and were intrigued by the predictions of Jesus’ imminent return.

After some failed prophecies in the 1870s, Charles became convinced that traditional Christianity had been off track for centuries and began his own study of the Bible. This led to his publication of the Watchtower journal, his Studies in the Scriptures and the Associated Bible Students organization.

During his ministry, Russell defended himself in a number of lawsuits for fraud, as well as accusations by his estranged wife, Maria. The imminent return of Jesus was a major theme in his ministry, with a projected date of 1914. In 1915, Russell claimed that Jesus had returned invisibly to expand the Bible Students movement.

In 1917 Joseph Rutherford took over the Bible Students after Russell died and expanded the movement worldwide. When Rutherford revised some of Russell’s works, some members left to form The Laymen’s Home Missionary Movement and The Dawn Bible Students Association. Rutherford made two other important changes: In 1922 a major stress was placed upon door-to-door preaching and in 1931 the name was changed to the Jehovah’s Witnesses.

Concept of God. God is referred to by the name Jehovah, God is a unity, rather than a Trinity.

Jesus Christ. Jesus is a being of great power and authority, but not eternally God. He was the Archangel Michael, later born of the Virgin Mary as Jesus of Nazareth.

Salvation. Jesus died to restore human nature and Creation from the effects of the fall. People must trust him for this, and then faithfully obey God through participation in the activities of the Jehovah’s Witnesses.

The Afterlife. People will be assigned one of three possible destinies:

The End of the Age. Witnesses believe that Jesus will return to establish Jehovah’s Kingdom after the Battle of Armageddon. The Watch Tower Society’s predictions for the end of the current age has included predictions related to 1914, 1925, 1941, 1975 & 2000.

Structure. Kingdom Halls are congregations, presided over by elders. The organization is directed from Watchtower Headquarters in Brooklyn, New York, where the Board of Directors runs the day-to-day operations and publishes their literature.

Weekly Meetings. Kingdom Halls contain no religious symbols and stress functionality. Witnesses are assigned to a congregation in their local area, where they are expected to attend both the weekend and mid-week meetings. These meetings center around study of the Bible and Watch Tower Literature.

Gospel Work. Witnesses engage in house-to-house outreach as a primary means to prove their faith and attain salvation. Members fill out monthly reports on their ministry activities, which are used by leadership to assess their spirituality and commitment.

The Issue of National Allegiance. Jehovah’s Witnesses refuse to salute any national flag, serve in the military or to be involved in political activities because participation amounts to an endorsement of the present system, which they regard as under Satan’s evil influence.

The Issue of Traditional Celebrations. Witnesses do not celebrate birthdays or participate in other types of festivities because no good biblical precedent can be made for a celebrating birthdays with a party. They also believe that traditional holiday celebrations are either connected to ancient pagan practices or tied to a national celebration.

The Issue of Blood Transfusions. Since 1945, Jehovah’s Witnesses have generally refused to receive blood transfusions though a minority of Witnesses disagree with the policy. In recent times, the Watch Tower has created the Hospital Information Services, which is responsible for promoting bloodless surgical procedures.