In case you missed it, watch the previous video: Introduction & Welcome to the Tour

Besides Jerusalem and Bethlehem, Jericho may be the most familiar city mentioned in the Bible. Jericho was a main point of entry to the Holy Land from the east; it was the hub of a major agricultural region; and it was a thriving and prosperous commercial center.

Come along with Melinda and I for your guided historical tour of the Ancient city of Jericho, as we experienced it in January of 2015 (video below). If you’re excited about the tour, be sure to invite your friends and family to join in on the journey! They can subscribe to our YouTube channel, follow along here on our blog, or catch us on Facebook, we’ll be posting there as well.

Jericho pops up in several places in the Bible. In the New Testament gospels, Jesus met Zaccheus in Jericho, and it turned Zaccheus’ life around. You may also recall that the Good Samaritan was on the road from Jerusalem to Jericho, when he came upon the Jewish man beaten, robbed and left for dead and helped him to recovery. Back in the Old Testament book of Joshua, Jericho was the first city that Israel conquered as they entered the land of Canaan in chapter 6. Remember that Israel walked around the walls of Jericho once a day for six days, and on the seventh, they walked around seven times, blowing trumpets and shouting, and the walls came crashing down.

But did that really happen? Many people today would find the story to be pretty far-fetched. And I bring this up because Jericho serves as a prime example of how different people with different biases can look at the same information and come up with very different conclusions. It happens all the time, and we are frustrated by this phenomenon. I think what we saw at Jericho give some clues as to why this happens.

As you will see in the later part of this video, there is a more recent city built next to the dirt mound that covers the ruins of ancient Jericho. Over the years, there has been some archaeological excavation at the mound, called Tel es Sultan, but the vast majority of ancient Jericho is still untouched. Two archaeologists in particular worked on ancient Jericho in the 20th century.

John Garstang excavated there from 1930-1936. After meticulous efforts, Garstang concluded that the deeper layers of the mound, which he dated to around 1400 B.C., dramatically confirmed the record of Joshua 6. He found that the mud brick walls of the city at that level had fallen outward in almost every place. The pottery he examined showed signs of sudden destruction and abandonment, and the large stores of grain were not salvaged or plundered, but were burned where they lay. In Joshua 6, God forbade Israel from plundering Jericho, but ordered the entire city burned, and left untouched. In his report Garstang stated that he believed that his excavation largely supported the Bible’s record.

On the other hand, Kathleen Kenyon dug in another spot on the mound from 1952-1958. Her conclusions were quite the opposite. She believed that Garstang was completely mistaken about the date of the destruction of the city at that level. She said the destruction occurred much earlier, and that it was due to either an earthquake, or an Egyptian invasion. In her report, she wrote that nothing she found had any correspondence to the Joshua account, which she believed to be merely an Israelite fable.

So which view is accurate? Well, personally I favor Garstang’s findings. In 1 Kings 6, the Bible states that Israel came out of Egypt 480 years before Solomon took his throne, around 960 BC, so Garstang’s date in the 1400s BC for the destroyed layers would be about right. The evidence closely matches the Joshua record. The argument made by Kenyon that the miraculous collapse of the walls is just an ancient fable, I believe is much like the many other examples of the skeptical view that the ancient Israelites were ignorant, backward and prone to making up amazing stories about themselves. Like all of us, I think Kathleen Kenyon was a product of her own experiences, prejudices, and whatever training that happens to be in vogue at any given time.

So what does this example from ancient Jericho have to do with us today? Just this: ultimately your deepest beliefs will determine what you see and how you interpret what you see. You will interpret the evidence before you in light of how it fits with your basic view of the world and how it works. So if you think the Israelites were liars and the writers of the Bible were backward, then any evidence to the contrary will probably not sway your convictions. You’ll find other ways to fit it into your worldview. If you think God had something to do with the writing of the Bible, and that miracles may occur at times for specific purposes, then evidence that supports that view tends to make sense. Didn’t Jesus say in Matthew 13:15, “…For this people’s heart has become calloused; they hardly hear with their ears, and they have closed their eyes. Otherwise they might see with their eyes, hear with their ears, understand with their hearts and turn, and I would heal them.”? 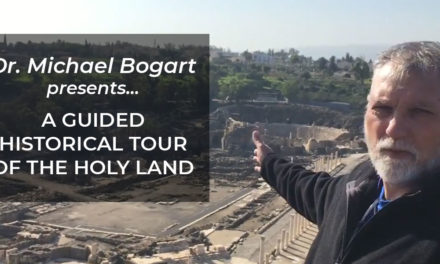