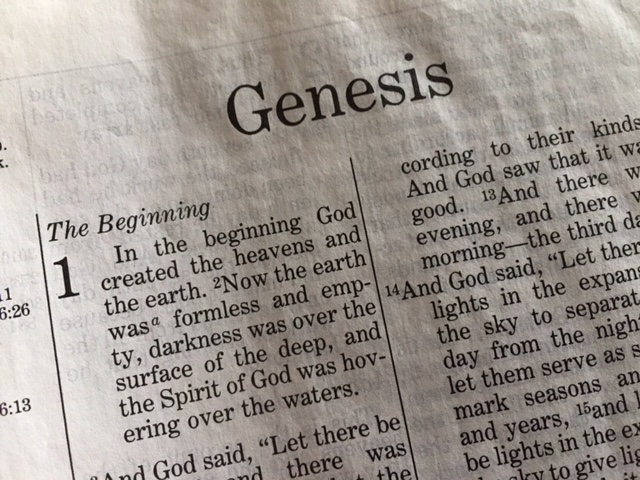 Here’s a suggestion for a great way to begin the new year—Take the Aspect Ministries’ Genesis Challenge during the month of January! Join us for a narrated tour through the first book of the Bible—Genesis.

How The Genesis Challenge Works

During the first week of January, I invite you to do two simple things:

The video clip and the reading will get you up-to-speed with the story line in Genesis, and highlight some significant cultural differences between life in the ancient Middle East and life in modern times.

Starting January 7th, you can begin to read Genesis itself.

You can find the reading schedule here. I have grouped the 50 chapters into 24 reading units. You can follow my schedule from January 7-31, or you can read the chapters at your own pace, ending whenever you want. The important thing is to learn and to be transformed by what you read. Don’t worry—I will post a brief blog each day to give some background about what you’re reading to help you get started.

What is the Goal?

As you work your way through each section, set these four goals as guides for discovery and personal growth:

You will find it helpful to keep a journal or log to record your thoughts, questions, and findings. As you read, I hope you will join me in sharing some of what you are learning on the Aspect Ministries Facebook page.

In addition to viewing an eight-minute clip from my video, The 45-Minute Bible, read the following brief overview to give you some overall perspective on the book of Genesis.

Genesis is the first book of the Bible, and the first book in the section of the Bible often called by its Hebrew name: Torah. The Torah contains five books—Genesis, Exodus, Leviticus, Numbers and Deuteronomy. Although critical scholars believe that Genesis was written by a variety of ancient authors and then edited together at a much later time, strong Jewish and Christian tradition point to Moses as its author, sometime between 1450 and 1200 BC. In the book of Genesis, Moses begins the job of introducing God and His purposes through the personal accounts of key people in the line of redemption.

In its first two chapters, Genesis begins with a moving account of the creation of the universe, of the Earth, and of plant, animal, and human life. For example, Genesis opens with these memorable words:

In the beginning God created the heavens and the earth. Now the earth was formless and empty, darkness was over the surface of the deep, and the Spirit of God was hovering over the waters. And God said, “Let there be light,” and there was light. God saw that the light was good, and he separated the light from the darkness. God called the light “day,” and the darkness he called “night.” And there was evening, and there was morning—the first day.

The creation of humankind at the end of chapter 1 is equally poetic:

So God created mankind in his own image, in the image of God he created them; male and female he created them. God blessed them and said to them, “Be fruitful and increase in number; fill the Earth and subdue it. Rule over the fish in the sea and the birds in the sky and over every living creature that moves on the ground.”

Anyone who is familiar with the biblical story will remember that the ideal existence of Adam and Eve in the Garden did not last. In Chapter 3, the Serpent (who is equated with Satan throughout scripture) used trickery and half-truths to tempt Eve into eating fruit forbidden by God. Eve’s deception was followed by Adam’s overt abandonment of his relationship with the Creator. The consequences of this pivotal event are seen as catastrophic in the Genesis account. They include banishment from the Garden, personal knowledge of the realities of evil, pain, frustration, suffering, wickedness, and the backbreaking toil of human life as we have known it ever since.

The New Testament casts an even graver outcome on this event: the degeneration of human nature into darkness and sin. In effect, the New Testament sees the fundamental rebellion of Genesis 3 as severing our connection with God as the source of life and goodness (…for when you eat from it—the forbidden fruit—you will certainly die). So the biblical answer to the basic question of why evil exists in the world and why people are the way they are, lies in three truths about human nature in the first three chapters of Genesis:

Modern psychology has introduced concepts like the sub-conscious, the ego, id, and super-ego. While we can learn much from current research and psychological theory, the Bible shows human nature very simply: people are capable of intellectual, moral, and social greatness. We are also capable of horrible darkness and destruction. The Bible’s solution to the dilemma of our human nature is a reconnection with our Creator. How we can make this reconnection is the message of the rest of scripture.

Beginning in Genesis 4 and continuing through Chapter 11, the human race degenerates into deepening depravity. In Chapter 6, God takes action to arrest the downward cycle, by sending the Great Flood, destroying all life, except for Noah’s family, and what could be carried on the Ark. From this remnant, God will rebuild the human race and renew life on earth. In fact, God’s redemption of the human race seems to progress through a series of remnants: Adam’s line is broken by Cain’s murder of Abel, but God makes a remnant through the birth of Seth. Seth’s line falls into depravity, but God spares a remnant through Noah. Noah’s line is corrupted, but a remnant continues through Abraham. And so it goes through Isaac to Jacob and to his twelve sons, and then throughout Israel’s history, down to the birth of Jesus.

The Redemptive Line of Abraham

In Genesis 12, the redemption of the human race continues through the calling of Abram, whose name was later modified to Abraham:

The LORD had said to Abram, “Leave your country, your people and your father’s household and go to the land I will show you. I will make you into a great nation and I will bless you; I will make your name great, and you will be a blessing. I will bless those who bless you, and whoever curses you I will curse; and all peoples on earth will be blessed through you.”

So early on, the Bible singles out the family line of Abraham as the people through whom God will work to redeem the human race. One way of looking at the story of Abraham is to examine the meaning of the two forms of Abraham’s name. Abram means something like “Great Father”.  This name must have made him the regular brunt of jokes among his neighbors, given the fact that Abram and his wife Sarah were childless well into their old age. Genesis indicates that some time around 2,000 BC, Abram moved from his birthplace in what is today southern Iraq, westward to the territory of Canaan–modern Israel and Palestine. Early in his time in Canaan, God promised to give this land to Abram’s descendents. When Abram reminded God that he was childless, God further promised, “Look up at the sky and count the stars—if indeed you can count them.” Then he said to him, “So shall your offspring be.” Abram believed the Lord, and he credited it to him as righteousness.

From the viewpoint of the New Testament, this is a pivotal event. Abram’s leap of faith at age 75 in believing God’s promise of many descendants marks him as a man of great faith. The birth of Isaac to Abram despite Sarah’s barrenness, demonstrated the faithfulness of God’s promise and the extent of his power. It also caused Abram’s name to change into Abraham (Father of a Multitude). Although he had moments of doubt, Abraham’s long life shows a steady growth of faith in God’s promises and in his consistent availability to serve him.

The extent of Abraham’s faith is shown in his willingness even to do anything that God commanded—even if it made no sense. In Genesis 22, God commanded Abraham to take Isaac, who had been born so miraculously when Abraham was 100 years old, and sacrifice him as an act of worship. Without questions or arguments Abraham prepared to do as he was told. According to Hebrews, Abraham believed that God was able to raise Isaac from the dead if need be in order to fulfill his promises. Even though Isaac’s life was spared at the final moment, this event is recalled throughout the rest of scripture as the supreme example of faith.

The Patriarchs from Abraham to Joseph

Genesis also traces the line of Abraham through Sarah’s maidservant, Hagar, to Ishmael who is the ancestor of some of the Arabian tribes. Abraham’s redemptive line, however, is counted through Isaac and his son Jacob, and then to Jacob’s twelve sons—the patriarchs of Israel’s twelve tribes. In contrast with the adventurous character of Abraham, Isaac seems to have been a quiet man, who lived out his faith in relative peace in the land of Canaan. The story of the next in the patriarchal line—Isaac’s son Jacob—paints a very different picture of a shrewd and deceptive man who struggled between self-will and reliance upon God. Reading through Jacob’s story, you will see that Jacob didn’t resolve this struggle until middle age, when he personally encountered and wrestled with God. Thus personal encounter with God seems to have broken his self-will and left him with a new identity and a new name—Israel, which means powerful with God. Thereafter, his family and descendants became known as the people of Israel.

In his later years, Jacob and his family were eventually forced to migrate to Egypt because of a famine. When they arrived in Egypt, they were welcomed and sheltered by Joseph, one of Jacob’s sons who had been sold into slavery by his jealous brothers years before. Despite his slavery, God had blessed Joseph in Egypt and he had risen to something like the status of prime minister. It was under these favorable conditions that the clans of Israel began to multiply rapidly under the protection of the rulers of Egypt who were friendly to Joseph. Genesis ends with Joseph as the obvious heir to the heritage of faith, and with his relationship to his brothers restored through his willingness to forgive them completely.

If you want to view the entire 45-Minute Bible video, I have provided a free link to the streaming version on YouTube.

Remember, as you read each section, use these four questions as guides for discovery and personal growth:

You will find it helpful to keep a journal or log to record your thoughts, questions, and findings. Please feel free to share what you are learning on the Aspect Ministries Facebook page.

Sign up to take part in the Genesis Challenge for the month of January. Opt in and receive a reminder email to help keep you on track with your reading plan. 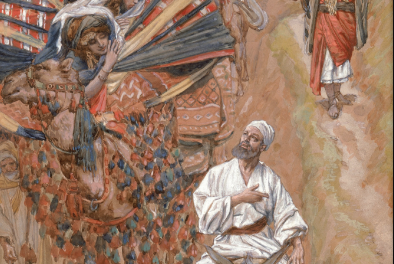 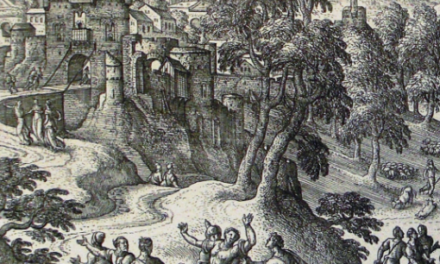 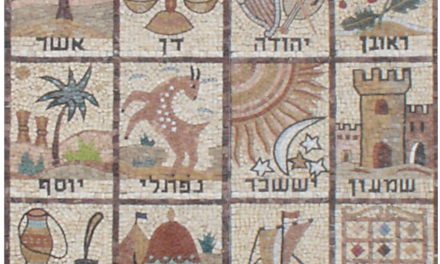 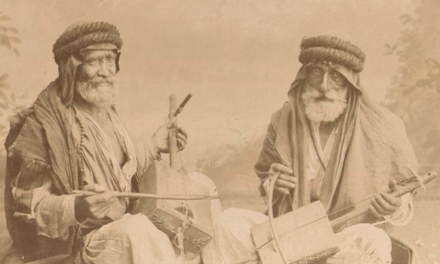