I remember coming across a timely poem in my high school American literature class.  At the time, reading it was only an assignment, but for some reason it has stuck with me over the years.  It is titled Richard Cory, by Edwin Arlington Robinson:

Whenever Richard Cory went down town,
We people on the pavement looked at him:
He was a gentleman from sole to crown,
Clean favored, and imperially slim.

And he was rich—yes, richer than a king,
And admirably schooled in every grace:
In fine, we thought that he was everything
To make us wish that we were in his place.

So on we worked, and waited for the light,
And went without the meat, and cursed the bread;
And Richard Cory, one calm summer night,
Went home and put a bullet through his head.

I guess what makes this bit of verse so vivid to me is that it points out a significant contradiction in the way we live:  We know the futility of status, wealth and charm in themselves, and yet we crave them relentlessly.

All of us know a Richard Cory or two: those who seem to have made it and have everything.  They are rich, beautiful, successful and admired.  They drive their sports cars around in perpetual sunshine with the convertible tops down, while we blunder through the fog in our clunkers.  The Richard Corys of the world represent the ultimate goal of so many people: to make it, whatever the cost.

Yet, from time to time, we hear the unsettling news that some celebrity or jet-setter has ended his or her life, either deliberately or through some kind of substance overdose.  We hardly know what to think at such times.  This person seemingly had it all, but threw it away.  What could have caused such despair?

Thinking a little deeper might alert us to the warning this is for all who wish to trade places with Richard Cory.  The person who makes it to the top so often goes to bed with the sinking realization that everything they have is– in itself– empty.  Beauty, wealth and popularity give only temporary satisfaction and leave a long-term hunger for something more.  Hence the never-ending search for deeper pleasures, a more impressive record, an enhanced body, more extravagant vacation or just more stuff. When these things fail to satisfy as well, leaving that gnawing hunger for fulfillment, people sometimes decide that the pain is unbearable.

Fortunately, there is an antidote to such futile living.  It can be found in the words of Jesus recorded in Matthew 6:19-21, “Do not store up for yourselves treasures on earth, where moth and rust destroy, and where thieves break in and steal. But store up for yourselves treasures in heaven, where moth and rust do not destroy, and where thieves do not break in and steal. For where your treasure is, there your heart will be also.”.

In these words, Jesus gives us a piercing insight into the workings of our own souls.  He tells us frankly that earthly treasure does not last: it can be eaten up, rusted through and stolen.  He teaches us that we can diagnose the state of our soul by examining the type of treasure it craves.  When we examine ourselves according to Jesus’ words, we may conclude that we have been seeking the wrong things most of our lives. Jesus’ answer?  Acquire incorruptable treasure.  In other words, exchange the desire for temporary, shallow things for that which is ultimately fulfilling.  But how?

It starts by getting real with ourselves.  The truth is that we desire unfulfilling things simply because they make us look and feel good without inner change.  They promise that we can bypass the struggle required to actually deserve the admiration of people and the fulfillment, which comes from an approving conscience.  In other words, a focused desire for wealth and status points out our insignificance and smallness of character.  When it becomes clear that this is what we really are, then we must repent.  Repent: such a harsh and unpleasant word.  But there is no real shame in this.  It is a universal human condition.  The sooner we get there, the more quickly we may actually become something and acquire that which will really satisfy our souls.

Then we must seek from God those things, which can give us real significance and make us truly admirable.  Things like: the ability to love people; an inner contentment regardless of circumstances; joy which cannot be suppressed by the fickleness of life; and the knack of living in and by the grace of God.  The great thing about asking God for things like this is that he is very good about giving them.

Despite his wealth and position, Richard Cory never really lived because he was just a shell.  But then, often so are we.  Jesus invites us to become truly alive and truly fulfilled by drawing our life from him: “I am the way and the truth and the life. No one comes to the Father except through me.”  John 14:6

What the Bible Says About Giving 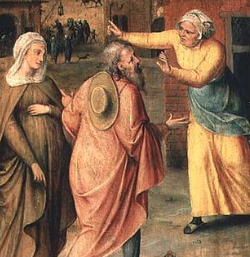