Maybe you are like me in having attended dozens of evangelism training sessions over the years. I have both learned and taught the Four Spiritual Laws, The Bridge, Steps to Peace With God, Evangelism Explosion and a number of other methods and approaches. Each of these tools may have its merits, especially in focusing the content of the gospel on Jesus and a person’s response of faith in him. At least in the circles I travel in, there has been a substantial amount of talk about what we say to people. My concern lately, however, has been with the equally important issue of how we meet and relate to the people we desire to share this message with.

Along with my pastoral ministry within the church, it has been my privilege to have the opportunity to be involved in many community activities. For many years, I have also taught part-time in a couple of universities and a community college in my area where I have met literally hundreds of students from nearly every walk of life. This experience has resulted in some pretty seasoned views about how to relate to people as a genuine Christian. So, here are some things to keep in mind as you meet people who do not openly profess the Christian faith.

Before I go on, let me speak to the issue of church category. Again, simply because a person attends a church which is not similar to yours, it does not necessarily mean that they are involved in a compromised form of Christianity. There are genuine believers in the biblical Jesus in a variety of churches, which may be somewhat different from your own.

o An invitation to a church service is an easy entry-point. In many churches on Sunday morning, visitors are not be singled out or embarrassed, but can sit and simply observe while at the same time being exposed to scripture and the gospel.

o Perhaps a special event will be of particular interest to them. Care groups, programs for their children, women’s and men’s groups and activities, as well as youth events are all options which may meet a certain need in their life.

o Maybe the best option is to offer a chance to spend time together with you. Something as simple as a cup of coffee and some conversation for a few minutes can develop into a friendship, which can lead to a deep sharing of the Christian faith. It goes without saying that it is usually best for men to befriend men and women to befriend other women. Don’t forget that the gospel is all about transformation of life from the Kingdom of Darkness into the Kingdom of God’s beloved Son (Colossians 1:13-14). As a friend, your own story will be of great interest to them and perhaps of deep influence on them.

With these reminders clearly before us, sharing Christian faith in the postmodern culture of the Twenty-first Century does not have to be intimidating. In fact, it can be a hugely rewarding experience and a stimulus to growth in areas we may have yet to experience.

A Brief Beginners Guide to the Bible 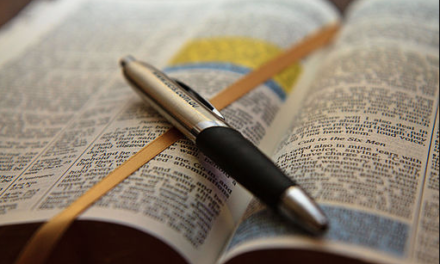